Create an Account - Increase your productivity, customize your experience, and engage in information you care about.

Canton Club 55+ offers a wide variety of programs and services for Canton's adult population. Check out all the fun classes, clubs and events that we have in-store for the year.

Canton Club 55+ is located in the Parkview Room of Summit on the Park Community Center.

Many of our programs are offered at a low cost. Each program will have the registration fee made available to you in the Discover Brochure or by calling 734/394-5485.

Bingo takes place approximately one time per month and is sponsored by American House. This program is designed for individuals 55+ years. Registration is available online and at the Club 55+ front desk. To learn more call 734/394-5485 or visit  Online Registration.

At Summit on the Park we offer a number of different fitness classes for members and non members. Below is a sample of some of the classes we offer.

A list of additional classes can be found on the Summit on the Park class web page and in our Discover brochure.

We have partnered up with DMC to offer FREE wonderful educational workshops. Please pre-register online or stop by DMC to reserve your spot.

Enjoy a monthly cinematic feature with friends. Movies start at 1 pm in the PDC room. Please bring a sweater with you in case the room is chilly. Snacks sponsored by Regency of Canton. Please register for a spot not later than the day before the movie. Limited space available.
Fee: $1M/$2R/$3NR

PG-13 (drama/fantasy)
Jack Malik is a struggling singer-songwriter in an English seaside town whose dreams of fame are rapidly fading, despite the fierce devotion and support of his childhood best friend, Ellie. After a freak bus accident during a mysterious global blackout, Jack wakes up to discover that The Beatles have never existed. Performing songs by the greatest band in history to a world that has never heard them, Jack becomes on overnight sensation with a little help from his agent.117 min.

PG-13 (Drama, Musical & Performing Arts)
Winter 1968 and showbiz legend Judy Garland arrives in Swinging London to perform a five-week sold-out run at The Talk of the Town. It is 30 years since she shot to global stardom in The Wizard of Oz, but if her voice has weakened, its dramatic intensity has only grown. As she prepares for the show, battles with management, charms musicians and reminisces with friends and adoring fans, her wit and warmth shine through. Even her dreams of love seem undimmed as she embarks on a whirlwind romance with Mickey Deans, her soon-to-be fifth husband. 118 min.

PG (Action & Adventure, Animation, Drama)
From Disney Live Action, director Jon Favreau’s all-new "The Lion King" journeys to the African savanna where a future king is born. Simba idolizes his father, King Mufasa, and takes to heart his own royal destiny. But not everyone in the kingdom celebrates the new cub’s arrival. Scar, Mufasa’s brother-and former heir to the throne-has plans of his own. The battle for Pride Rock is ravaged with betrayal, tragedy and drama, ultimately resulting in Simba’s exile. With help from a curious pair of newfound friends, Simba will have to figure out how to grow up and take back what is rightfully his. 110 min.

Canton Leisure Services has many wonderful groups that meet to sew and complete crafts. These are great social opportunities and a chance to ask others for ideas.

Make and Take: Let’s Get Creative

Get your creative juices flowing. Join us for a specialty workshop, where participants will learn how to create something new and leave with their creation. Must pre-register.

For further information on Club 55+ Special Events (pricing, time, etc) please visit our online catalog or give us a call at 734/394-5485. Special events are geared towards those age 55+ and up and take place at Summit on the Park, unless specified. Pre-registration required for all special events.

Special events are being added on a regular basis. To keep up to date with current activities, please sign up for our monthly newsletter.

Canton’s Club 55+ has a well established Wii Bowling League. This group meets weekly for some friendly competition, socialization and exercise.You can sign up as a team/individual or sub. Teams are made up of four participants.

Drop in and enjoy playing the fastest growing sport in North America. Pickleball is a mixture of Tennis and Badminton and is a great source of exercise. Before participating, please pre-register at the Club 55+ desk and fill out a medical waiver.

Looking to get moving? Tennis is a wonderful way to enjoy the outdoors while exercising. Drop in programs run during the Spring/Summer/early Fall for ages 55+. Before participating, please pre-register at the Club 55+ desk and fill out a medical waiver.

For more information about our schedule, fees or to register, please stop by the Club 55+ desk, phone 734/394-5485Search for Tennis events Opens a New Window. .

Come and enjoy a match or two of drop-in volleyball. Participants can come as an individual, pair or a group. If there is more than enough participants for a game of Volleyball, a game of Walleyball will also take place in the racquetball court and participants can rotate between the two. Before participating, please pre-register at the Club 55+ desk and fill out a medical waiver.

Educational workshops are always being added.

Looking for some help with your laptop, smart phone or e-reader? Club 55+ is partnering up with Canton Public Library to offer 30 minute computer one-on-one appointments. You can learn to: use google, set up a social media page, navigate your smart phone and more! Appointments available the 2nd Tuesday of each month at 9:30am,10:00am & 10:30am. Pre-registration is required. Limited space available.
Fee: $1M/$1R/$2NR

(Intro)
Are you an adult 55+ who loves languages and learning something new? Then our Introduction to Spanish for 55+ is perfect for you. Our Spanish classes are designed for individuals who want to learn and practice Spanish in a relaxed environment with other students of a similar age. This program is for those with no experience or are looking to freshen up their Spanish language. Material fee of $12 is due to the instructor the first class. Ages: 55 and up

(Advance)
Designed for individuals who want to learn and practice Spanish in a relaxed environment with other students of a similar age.This level is for those with prior Spanish knowledge or have taken the Spanish- Intro class.

For fees and dates, please visit our program catalog

Looking for some extra help navigating the internet or your smart phone? Join us at the Canton library for our B.L.O.C.K. tech night. Teens from the B.L.O.C.K. are ready to help you one-on-one with your technology questions. Limited spaces available. Please sign up with Club 55+ at the desk, online or over the phone at 734/394-5485 at least a week prior to event. This service is FREE.

Looking to add more steps to your day, but not sure about purchasing a Summit Membership? Join our walking club to gain access to our indoor track and monthly incentives program that is designed to keep you moving. For more information and to receive your membership card and waiver, please visit the Club 55+ front desk. Registration is open year round. Online registration is available, however, membership cards must be picked up at the Club 55+ desk.
For ages: 55+

Individuals may use the track anytime during Summit business hours. 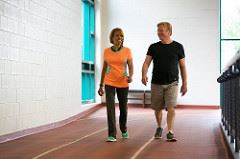